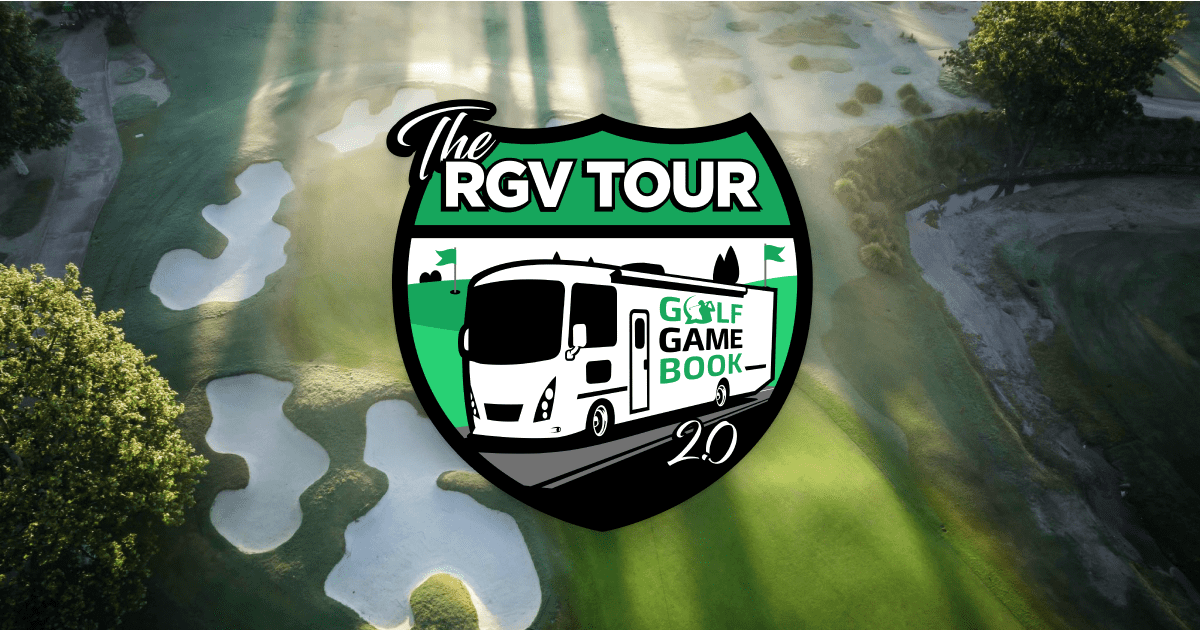 For Patrick Koenig, 2018 was the year of making dreams come true. He drove across the United States with an RV, played golf in 47 states, played 405 golf courses and raised $20,000 for charity. The first RGV Tour was a huge success and created a movement in the golf community. Now four years later, The RGV Tour 2.0 is ready to kick off and it’s time to make history!

“On February 1st, 2019 the final putt of the RGV Tour was holed at Bandon Dunes. It was a 3 footer for par and it was dead center. Over the past year, I have golfed hard and laughed harder with 793 of you at 405 different golf courses. The people and places of The RGV Tour will always hold a special place in my golf heart. ”

Now almost four years after that final putt of the RGV Tour it’s time to get the wheels spinning again and take the RGV Tour to a whole new level.

Golf GameBook proudly presents: The RGV Tour 2.0 🔥 500 different courses, 12 events, 365 days, 1 golfer, one RV, a new Guinness World Record…and most importantly, powered by Golf GameBook. With Golf GameBook you can follow Patrick and the RGV Tour 2.0 live 365 days. First stop and kick off party will be at Monarch Beach Golf Links, California on 3rd of January 2023.

Patrick is a true golf-enthusiast and photographer from California. He quit his day job in 2018 to pursue his dream to play golf and capture amazing people, places and moments while doing it. By now his photographs have been featured on GOLF, Golf Digest, The Golfer’s Journal and many other publications.

Patrick loves having fun on the course and doesn’t take the sport too seriously. He’s an explorer and constantly on the go, so no doubt, you’ll get hooked on his content like the rest of his +100k followers on Instagram and other social media platforms.

In 2018, Patrick realized his dream he had been thinking about for 10 years. To drive across the United States, play golf in every state and raise money for charity. And oh boy, he actually did it. He golfed in 47 states, played 405 golf courses, drove over 35,000 miles and raised $20,000.00 for the First Tee, Greater Seattle. People, the golf world and the media took interest and 25 news channels, among others, did a story on Patrick and the RGV Tour to cover his journey.

But when you cross one thing off your bucket list new dreams arise. Now The RGV Tour 2.0 is ready to kick off and it’s time to make history!

Raising money for a worthy cause is in the DNA for the RGV Tour. That’s why at the end of the journey our goal is to present a check for $100,000 for The First Tee of Greater Seattle.

The First Tee of Greater Seattle is a youth development organization. They positively influence the lives of young people by building character, teaching life-enhancing values and healthy choices through the game of golf. The earlier on in life these lessons are adopted the more likely they are to last a lifetime.

Patrick will be breaking a Guinness World Record of “Most different 18-hole golf courses played in one year”. RGV Tour 2.0 will cover a total number of 500 courses in 365 days. The previous record of 449 courses was set in 2009, and no one is known to have attempted the same since then. You can spot Patrick and the glorious RGV (Recreational Golf Vehicle) across the United States.

Golf GameBook is about making the game of golf more fun. And what could be more fun than following the RGV Tour 2.0 in real time from wherever you are?

With Golf GameBook app you can:

See for yourself and download the app for free!