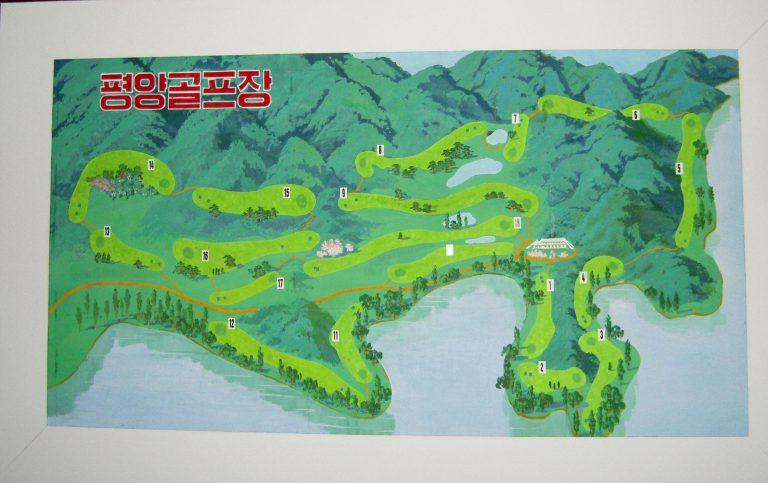 This story is a continuation of the previous blog post “In the Middle of the Dictatorship, part 4“…

So tourists are seeing everything that the North Korean government want to show, and nothing more. “This hotel is our country’s best, that’s second best, there’s our Dear Leader’s University, this Triumphal Arch is bigger than what’s in Paris, our metro runs deeper than any other metro in the world” are lines you will hear over and over again.

They took us to the world’s biggest stadium where they held the famous Mass Games every year to see The Grand Magic Show and on the next day to young children’s musical which was more scary than impressive experience because the kid’s supernatural skills. Elimination has been raw for sure.

In the back row other school kids were watching the some wearing their school uniforms. They sat in order quietly with straight face. What to think all of this after my week in North Korea? I’m confused. Trying to organize my mind on the train on my way back to border. Didn’t see any miserable fate I expected and had read about. Just differences compare to our Western life. Seems that time has stopped somewhere between 1950s and 1970s.

All of sudden the train stops. A local lady from countryside in her 30s made her decision and ran under the train. She felt life is not worth to live in North Korea. Maybe her family was forced to broke by government. Last sparks of hope were quenched one way or another. Or maybe she tried to escape but failed and knew she will get punished. The speed of our train in the middle of flat countryside was so slow that it couldn’t be an accident. I quickly took a look at the locals. No reaction at all. “Another one again”, they maybe thought.

As we very well know China can’t pride itself either of human rights but notwithstanding I’ve never felt such a relief in my life as when we arrived to the communist country. During that minute even China felt as a free country. Or more free at least.

Uppermost in my mind still was our guide’s words he said when we drove back from DMZ to Pyongyang by bus. “Some day we can start our tour from Seoul to Pyongyang and continue to Beijing from there. At that time I’ll already have my own travel agency.”

I see that as a sign of hope. Believing for better tomorrow. Has to be. Otherwise you don’t have enough strength. 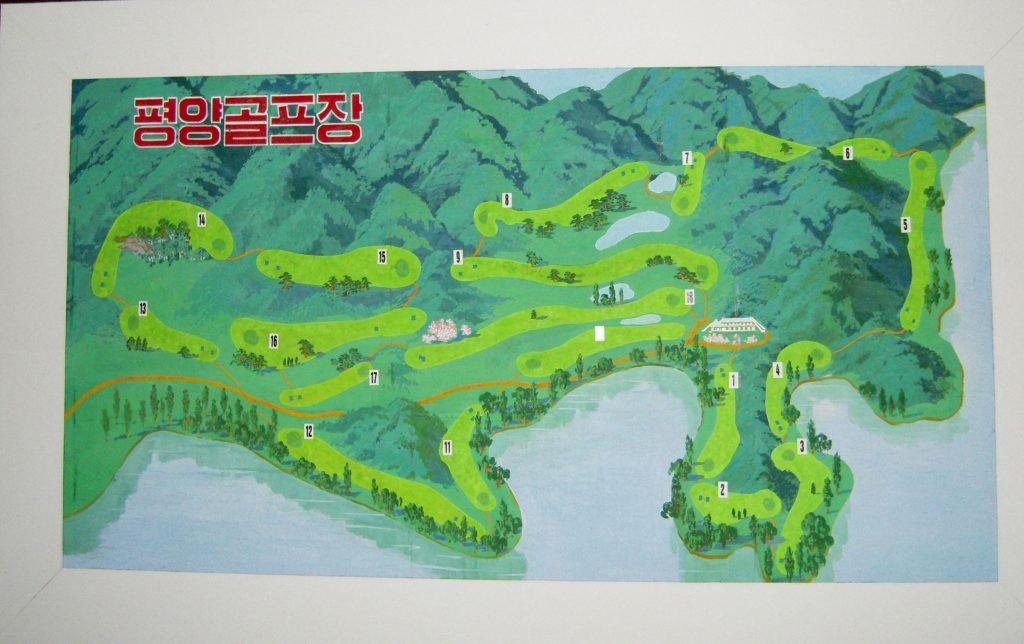 Course Map – Pyongyang GC. This was a huge table inside the clubhouse.

The only 18-hole golf course in North Korea is situated 27 kilometers west from the capital city Pyongyang, in the highlands of Mount Sokchon near the beautiful waterfront of Lake Thaesong.

You don’t have to go far to find the marks that leads to a scary nuclear factory. Youngbyo’s scientific nuclear research center is situated less than 50 kilometers from the Golf Club. Between the Center and the Club there are large mine fields and it is not recommended to search your ball from too deep on the golf course either.

Par is 72 and the total length from the backtee is 6200 meters and from the club tee 5800 meters, says scorecard. No rush hours or no even other players when you’ll play, except your tourist group, of course. During the year total number of played rounds can ce calculated in tens, as mainly the diplomats are using this course. 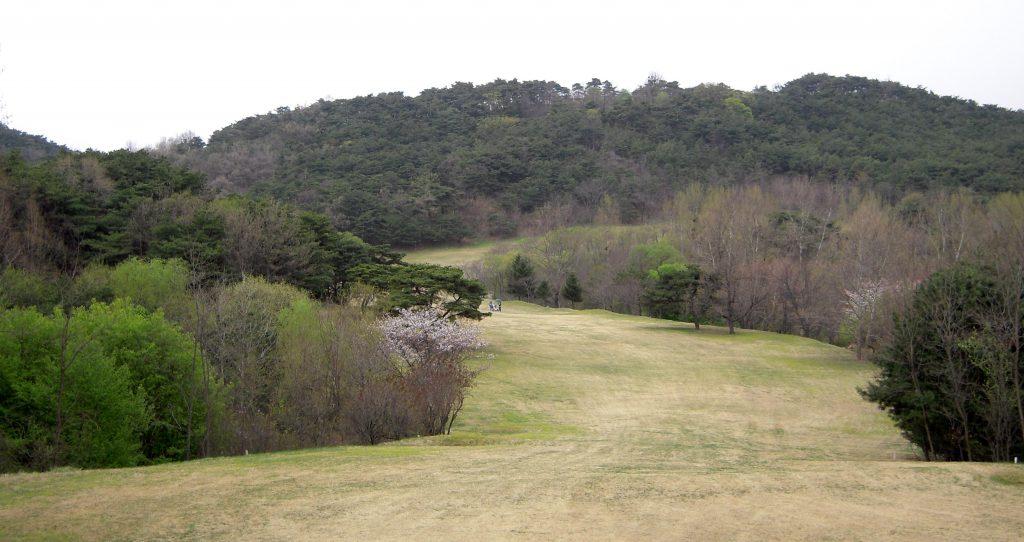 9th hole from the tee. Pretty narrow I’d say. If you miss the fairway, ball will be out of bounds almost every time.

The course was built in 1987 as the 75-year birthday present for President Kim Il-sung. The course was desingned by anonymous Japanese golf course architecht. One of the golf scene’s most famous legend was born on this course when Kim Jong-il tried golf first time ever. He made 11 hole in ones and played score 34, 38 shots under par, which was naturally the course record. After his round The Great Leader experienced golf as too easy sport for him and never came back to the club.

The layout of the course is very beautiful. White Magnolia trees are in the line and such a stunning lake views finalize this peaceful ensemble. Fairways were maybe the most narrow ones I ever played. Tongue must be kept in the middle of the mouth. If you miss the fairway by more than five meters, your ball will be out of bounds.

A true story: my playing partner hit to bunker rake and the ball rebounded couple of meters to the left. There were only basic chip shot left and very good chance to save par but no can do, ball was OB.  Between foregreen and OB-line there was only four steps – we measured that.

What comes to the course’s condition, there was the biggest difference comparing to courses we are used to play. In North Korean standards course was in regular condition, from our point of view fairways were below the average and too long cutted. The roughs were very challenging; long and thick. However, the biggest problems waited on the dancefloors. Greens were slower than my backyard’s grass and very patchy. I putted three meter long putt as hard as I have to putt 12 meter long back home.

The clubhouse was really a Pyongyang-style. Splashy, roomy, even glorious but clearly already seen its best days. And because there were no players around, the atmosphere was pretty spooky.

The public opinion among the players was that the course’s layout is very compareable to Western style courses. If they’d remove OB-lines, would cut greens to be a bit faster, and finally would take better care of the fairways, North Korea would have almost a world class golf course.

7th hole from the tee. This was an easy par 3 hole with a huge green. One of the easiest hole on the course.

This was the last part of the blog series  “In the Middle of the Dictatorship”. I had honor to win The North Korean Amateur Open 2011, though I didn’t play that well. No matter, it was one of those experiences I’ll never forget. Actually the experience affected me so strongly that in addition I have read lots of books about North Korea later as well as did my thesis of this mystical country to University too. You’ll find it here, unfortunaltely wrote in Finnish and I’m afraid I don’t have time enought to translate that one in English 🙂

About the photos: I have lots of them more and some are even better ones but I want to make sure here are no local’s faces. That might put them under some risks. You never know when it comes to North Korea.

Next time I’ll write some little bit lighter subject. And for Paul from Britain who asked me to translate this article, hope you liked this blog series and were able to read my English well enough. Cheers!